Well, a couple of months ago, actually. Don't know how I missed this: my old unit on the Memorial Day broadcast of "The Today Show."

This 1969 film by the Chief of Naval Operations' Office of Information shows the U.S. Navy Band in rehearsal and performance, as well as detailing the history and operational requirements of the organization.

It's about a half hour long, and is surprisingly frank, including a little salty language during rehearsal.

Originally published in the Rock Island Argus
and Moline Dispatch, July 8, 2010
Copyright 2010 Frank Mullen III
Impossibly, a band was playing "Anchors Aweigh."
Of course, I'd been hearing that song all week; I was returning from four days of music and sea stories at the annual reunion of the Navy Musicians Association in San Antonio, Texas.

But now, dragging my suitcase along Concourse A of the Quad City International Airport, I could have sworn I heard the Navy's song in the distance.

It was a Tuesday evening, and, aside from a few fellow passengers, I could see no one except a distant group of people moving slowly toward me. Still, I heard patriotic music and an unidentifiable whisper of excitement. I walked faster, leaving my fellow passengers behind, and hustled to the security screening corridor, where I expected to see my wife waiting.

Instead, I saw half the population of the Quad-Cities. The corridor, usually occupied only by a few security workers and travelers, was jammed with people of all ages holding red, white and blue banners and waving flags. And -- I wasn't crazy -- a band was playing "Anchors Aweigh."

OK, I'll admit it: for a second, I thought the party was for me. I'd had a rough trip home. A broken airplane toilet had caused the airline to cancel my connecting flight in Dallas, forcing me to spend the night in a Hilton Hotel Executive Suite, free of charge, meals included. Yes, I'd survived unspeakable hardships, and, clearly, my wife had outdone herself in planning this surprise welcome.

When my senses returned, I figured out what was happening: Those people I'd seen on the concourse were World War II veterans returning from an Honor Flight to Washington D.C. They'd visited the monuments that honor their service and sacrifice and this crowd was preparing to offer them a four-star welcome home.

This nation holds its defenders of freedom in the highest regard. Sadly, in this election year, some campaign activists are redefining the word "veteran" for their political advantage. Misapplying Veterans Administration regulations, these partisans boldly contend that an opposing candidate for office is not a veteran because his length of service is a few weeks short of the VA's requirement that, to qualify for certain benefits, a vet must serve on active duty for 180 days, exclusive of training.

This reasoning dishonors veterans of all eras and theaters. By such reckoning, I, a peacetime sailor, am a veteran, but a tail gunner who enlisted in 1945 and flew combat missions for five months and twelve days before his discharge at war’s end is not.

In fact, all who have served well, in war, in peace, on active duty, in the Reserves or National Guard, are veterans. It is not government regulations or campaign playbooks that tell us this; it is common sense and gratitude.

You may disagree. If you do, the rest of us are glad you weren't waiting at the airport when the Honor Flight returned, demanding each great-grandfather provide his service record so you could stamp "Not a Vet -- Respect Denied" on the papers of those whose history of service does not pass your political test.

Those who have worn the military uniform deserve honor, not inquisition. This is particularly true of World War II veterans. My overseas military service cannot compare with theirs. I brought home from Japan cheap stereo tuners and designer jeans; they brought home freedom and hope.

I hurried out of the corridor quickly to get out of the spotlight intended for the heroes following me.

I hope they enjoyed their welcome as much as I did.

I met the guys backstage right before the show, and, recalling what a hassle it always was to have old men kibitzing at you when you've got your mind on a million other things ("My son is in the Navy, too. You probably know him--Bill? Bill Johnson?") , I tried to keep it short.


Somehow, however, these guys seem to find time to read my newspaper columns. The group's leader, Steve Pendel, thanked me for a recent piece I wrote about Navy musicians. And--gulp--later, during the show, Chris acknowledged me from the stage.

Let me tell you: these guys do the work. I just write about it. But to have one of our own, an MU still on active duty, call you a patriot in front of half the City of Rock Island--well, I was sitting far back enough in the park that I doubt that Chris and the rest of the guys could see me wiping my eyes. Believe me, it was just some sort of mist blowing off the Mississippi River.

Rock on the Horizon

In a few hours, I'll drive up to Schwiebert Park in Rock Island for the Independence Day festivities, where Horizon, the pop contingent from Navy Band Great Lakes, will perform.

Although I am the undisputed king of geezer-quality rock 'n' roll piano, rock was never my favorite genre of Navy music. I played in rock and show bands as required, but never had that certain something it takes to stand under a basketball hoop and shout, "Good morning, Smithville High; are you ready to get down?" at 0815 in the god-forsaken morning. I was rarely ready to "get down" before noon; I was ready to get back in bed.

But I'm looking forward to seeing this group, in particular because the drummer is the son of NMA member John Pastin. Last week at the reunion, John and I reminisced about a Marine drummer we worked with long ago in Little Creek, Mark Adams, who drove bands not only with sticks and brushes, but with the most important thing in the drummer's gig bag, musicianship. John told me his son has that trait, and I look forward to hearing and meeting him.

And the entire band, of course. The show doesn't start until 7PM, so I may be ready to get down.
Posted by Frank Mullen III at 10:57 AM No comments:

As I wrote about earlier, I spent a lot of time in the Dallas/Fort Worth airport Monday, waiting for a flight back home that was repeatedly delayed and finally cancelled.

And everywhere I went, I heard Doyle Church.

Buying a cup of coffee at a Starbucks, I heard Doyle right behind me. I turned, but Doyle hid quickly; all I saw was some guy talking on a cell phone. Browsing at a news stand, I heard Doyle at the counter, but when I looked, again, he'd gone, leaving in his place a tall guy wearing a cowboy hat. Outside the men's room, at the boarding gate, everywhere I went, I heard Doyle's voice.

Except for one time. I was looking at newspapers in a gift shop when I could have sworn I heard Tex Waldron behind me.
Posted by Frank Mullen III at 6:37 PM No comments:

When we played as Navy professionals, we heard with our ears. Now, when we gather but once a year, we hear with our hearts, too.

And our hearts hear well the marches, suites and medleys the Navy Musicians Association Concert Band plays during days and nights of rehearsals and performances.

The ear is, of course, the more technically accurate measure. In fact, you can study ear training--we all did. A few months of practice can measurably improve the ear's ability to discern different pitches.
But there's no short course in "heart" training. It takes years of experience--joys, sorrows, losses, hopes fulfilled and dreams dashed--to prepare the heart to fully comprehend the effect of a concert band full of MUs.
Conductor Wilbur Smith and the NMA Concert Band provide us a great service every year. The ensemble is excellent, of course, but it's not an excellence that can be measured by tuning forks, oscilloscopes or audition boards with clipboards and grading sheets. It can only be measured by the heart. And by that more-important standard, the band measures up well.
Final grade: 4.0.
Posted by Frank Mullen III at 12:04 PM No comments:

The band photographer's greatest challenge is to get a shot of the entire trumpet section playing at the same time. This difficulty is caused by: 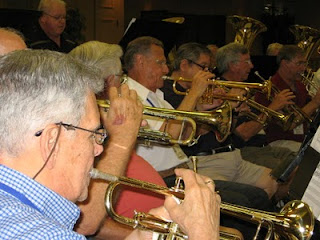 - Rests. Some players take unfair advantage of empty measures, using them as an opportunity to put down their horns and breathe.
- Spit valves. The trumpeter spends a lot of time blowing loogies onto his neighbors' shoes.
- Visual instrument examination. The trumpet player, when hearing an unsatisfactory sound emerge from the bell, is likely to stop playing, hold the instrument sideways before his face and look closely for mechanical defects or maladjustments, as though the cause of clams, squawks and fraps lies in the instrument itself.
Posted by Frank Mullen III at 10:19 AM No comments: 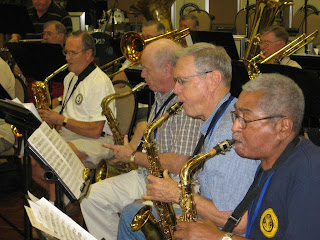 Posted by Frank Mullen III at 10:04 AM No comments: