I've updated the Navy Musician's Lexicon, a grudging concession to the fact that it's the only thing many visitors care about, it's the first thing I ever posted here, and, I painfully admit, maybe the best.
Posted by Frank Mullen III at 9:12 PM No comments:

The Unit Leader's Guide to the Shipboard Band

I was nervous when I first took a band to sea. I'f only I'd seen this training film. I wouldn't have had a care in the world, knowing the truth:

-- A shipboard band is happy. Beyond happy, in fact. The band members have iron-on smiles permanently creased in their faces. Just give them a chance to play, and the band is infected with joy. A seagoing band is on the verge of dying of delight, 24/7.

-- The crew is delighted to have a band aboard. Whenever music floats across the deck, the ship's company come rushing to listen. In fact, they'll probably pitch in and help.


-- There's not a ragbag in the bunch. Even when performing a routine shipboard gig, the MUs sparkle and shine. This is due, in part, to the support from the ship's laundry that works overtime to ensure the band's uniforms are always crisp, clean and ready to go.

-- Even the officers are thrilled to have a band aboard. They applaud the band's contributions toward shipoard life.

Rest easy, bandleader. Command Attitude toward the seagoing band can be summed up in the phrase, "You want it, you got it."
Posted by Frank Mullen III at 12:50 PM 1 comment:

Book your room for the NMA Reunion

You heard about it on the mess deck and smelled it in the salt air: port of call was just over the horizon. Suddenly, the berthing compartment echoed with questions. Who’s got pesos? Does anybody have a spare neckerchief? Where’s the second trumpet part to the national anthem of the Republic of East Euphonia? 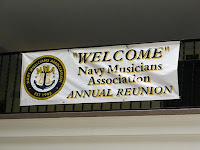 So it is as we approach the end-of-June NMA reunion in Orlando. With two months to go, we’re making travel plans, registering for the reunion and asking the annual questions: What key is “Straight, No Chaser” in? Did I remember to pay my 2012 dues? Will my brown jacket still fit?


Let me add one more important question: Have you reserved your room at the Orlando Doubletree Universal yet? If you still haven’t booked your room, I urge you to do so soon. Pronto, in fact.

You see, the fees the hotel charges the NMA for function rooms, facilities and amenities are based on the number of rooms we occupy. The more rooms we reserve--and the sooner we reserve them--the better the deal we get. Locking in your reservation now doesn’t just assure you of a room--it provides a major boost to our bottom line.


If you haven’t reserved your room yet, the information you need is below. I hope you’ll take care of this soon--maybe today. Our course is set for Orlando, and good times, good music and sea stories lie ahead.

Giving the group code will ensure you get our special NMA rate of $97 per night with free self-parking. The special rate is also good for the 3 days before and after the reunion.
Posted by Frank Mullen III at 8:02 PM No comments:


I'm generally not in the business of book reviews and promotion--I have enough trouble getting my own trash published. But when an MU does well enough that a major universiyy press publishes his autobiography, I'm willing to pay attention.

Actually, this isn't just an MU; it's the MU. "Clark: The Autobiography of Clark Terry" has just been published by the University of California Press.

Terry, according the the publisher's press release, wrote this life story himself. It's not a ghost-written "as told to" piece-work assemblage. It's the un-hyped and unpolished story of a major figure in jazz and Navy music history, in his own words. If you've ever read Count Basie's Good Morning Blues, you know what I'm talkin' 'bout.

The full title of this video is "Navy Band Great Lakes 1812 - 2012 Navy Week Assets and Capabilities." That's a long title, so I'll refer to it by shorthand: A Damn Good Idea.

As the political and economic climates threaten the health of military music, it's important to promote the fact that military bands function as a key component in building public support, raising morale and enhancing the dignity of service in our Armed Forces. By stressing the importance of ceremonial, patriotic and memorial events, this video goes a long way in countering the image that military bands are "frills."


This alone would be enough for me to give the video a hearty thumbs-up. But I am also impressed by something else: it's heartening to see such a top-notch public relations tool created by and for a fleet band.

Many well-done media presentations of Navy music focus, in whole or in great part, the U.S. Navy Band. While the units of this premier band are, indeed, superb, it is the Navy's fleet bands, ashore and afloat, at home and on distant shores, that take the Navy to the people daily, not just for a brief annual tour, but as a way of life. Thank you, Navy Band Great Lakes, for reminding us that it is the bands of the fleet that are, indeed, the "special" bands.
Posted by Frank Mullen III at 2:18 PM No comments: