Posted by Frank Mullen III at 7:48 AM No comments:

Who do you remember on Memorial Day?

People disagree on the intent and customs of Memorial Day. I've been to ceremonies that honor every deceased veteran, whether they died of injuries in war or old age in the nursing home. Some families decorate the graves of all loved ones on Memorial Day, whether or not the departed served in the military. Sometimes you can't tell the difference between Memorial Day, Veterans Day, Armed Forces Day, great-great-uncle Hezekiah's birthday, a beer blast and a half-price sale on suntan lotion.

I grew up observing Memorial Day as the U.S. Department of Veterans Affairs defines it, a day that "commemorates the men and women who died while in the military service." 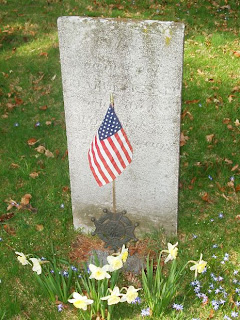 So, on Memorial Day, I particularly remember my grandfather. LCDR Frank Aloysius Mullen, USN, retired during the Great Depression, was called back to service in World War II and died in the last year of that war. As a child, we hung the flag that draped his coffin out the front window of our house every Memorial Day. As an adult, and a veteran myself, I continue that tradition.

I was born a few years after his death, so I have no specific memories of my grandfather. I remember him in the broadest of senses; at times we are called to ponder and reflect upon people we did not know, whose experiences we did not witness, yet whose legacies still affect us. For reasons that I cannot explain, because I don't fully understand them, I doubt that Frank Mullen III would ever have found a home in the Navy were it not for the family stories and remembrances of Frank Aloysius Mullen.

Who do you remember?
Posted by Frank Mullen III at 9:22 PM No comments: