(WASHINGTON, DC) NavyLyresNews - The Bureau of Personnel has authorized a special designator for Navy Musicians who completed recruit training as members of regular rifle companies.

"Rifle Company musicians are a special breed," said RADM Vincent Tremont, Vice-chief of Training Systems Command. "They are the vital core of Navy music, the salty MUs who went through boot camp 'the hard way.'" 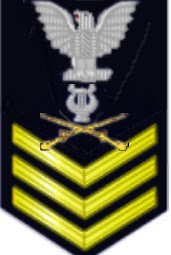 "The new designator recognizes that boot camp is not a party;" says RADM Tremont. "It is an experience designed to test and train the Navy's future leaders. And the Navy MUs who have undergone training in regular rifle companies have proven to be the he-men, the she-women, the muscle of Navy music."

The new RCMU crossed-rifle insignia is worn beneath the lyre on the MU rating badge and identifies the bearer as a member of Navy music's elite.

This is not a joke.

****IMPORTANT NOTICE TO OUR CUSTOMERS****

Due to manpower reductions executed within our organization Navy Band Mid-South will no longer have the capability to provide the following:

Military ceremonial support will be provided by a Brass Quintet and restricted to indoor events.

We appreciate your patience as we transition to a smaller organization. If you have any questions, please contact band operations at (901) 874-5785 or nbms.ops@navy.mil.
Posted by Frank Mullen III at 7:52 PM No comments: