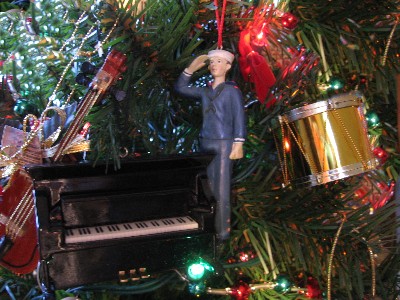 Posted by Frank Mullen III at 8:36 AM No comments:

For a number of Christmases in the early 80s, I was the St. Nick of Navy Band Newport. (Anyone who has trouble picturing me as a saint should try imagining John Farquhar as an elf. Now there's a stretch).

After delivering candy canes to the children of band members and caroling along the streets of Newport, Santa and his elves traditionally retired to Jeremiah's Pub. For the purpose of this discussion, the term "retiring to Jeremiah's Pub" may be defined as "crawling into the nearest bar and slamming down whiskey sours until 'last call' is announced." 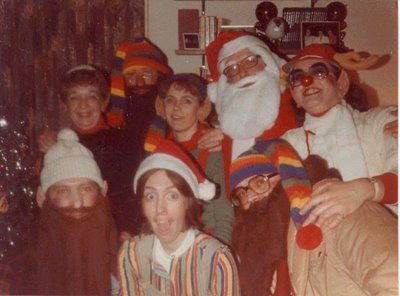 Pictured here are Santa and a contingent of elves that may include Steve Rawson, Dave Czohara, Steve Parent, Steve Dimond, his wife Melissa and his mother, John Farquhar and his wife, as well as Paula Czohara the Red-nosed Reindeer. Granted, that's more people than appear in this picture. Keep in mind that one elf had to take the photograph while a few more were strewn about the deck in varying states of unconsciousness.