Another Milestone in Music History

2007: Dennis Allard steps up to the microphone at the dinner/dance of the reunion of the Navy Musicians Association and utters the historic phrase, never before heard at an NMA function: 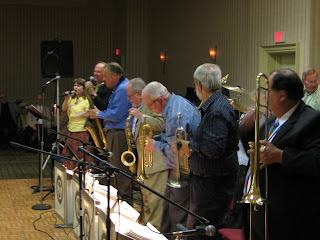 After the big band finished playing for the Saturday night dance, a courageous group of members put on their boogie shoes and played a set of rock tunes. After a only a few songs, this bold experiment had the dance floor filled. (I had to reassure my wife that what I was doing was dancing; she thought I was choking on a chicken-bone while doing jumping jacks.)

The Navy Musicians Association is attracting younger members. As our membership becomes more age-diverse, our musical tastes will broaden.

Personally, I love big band jazz. I grew up listening to my father's Count Basie records, and was astounded when the Navy gave me a full-time job in a big band rhythm section. There's still nothing I'd rather play than big band music.

I'm also aware that the style reached its peak of popularity almost seventy years ago.

So, don't let the addition of some rock 'n' roll to the NMA's entertainment roster get your crackerjacks all a-twist. Big band and concert band will always be the mainstays of the reunions. Those traditional ensembles provide performance opportunity for large numbers of members and provide fellowship as well as great music.

But "Proud Mary" can sit at the table with "Mood Indigo" and "Victory at Sea." There's plenty of music to go around.
Posted by Frank Mullen III at 8:33 AM 1 comment:

In the late 70s, I could recite, for the entertainment of my fellow School of Music staff members, the entire speech that the commanding officer, LCDR Ron van Hoose, routinely delivered at Basic Course graduations. The text of his address is stored in some inaccessible part of my brain, along with the General Orders of the Sentry and the number of ruffles and flourishes accorded to a Minister Plenipotentiary. But I've always remembered the skipper's closing line: 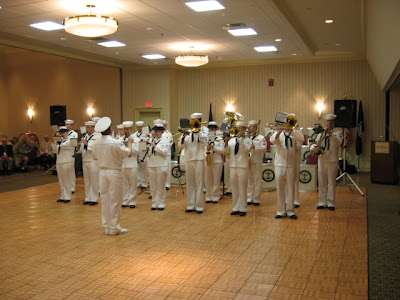 "As ambassadors to the public," he'd say, looking over the ranks of eager, soon-to-be military professionals, "how you look is just as important as how you sound."

These are not words young military musicians want to hear. A new, hard-charging MU would prefer to be noted for his double high c or the speed with which he can render the head to "Donna Lee," rather than his posture or his ability to roll a tight neckerchief.

The 2007 reunion of the Navy Musicians Association culminated in a Saturday-night dinner and banquet, preceded by a patriotic opener provided by a ceremonial detachment from the CINCLANT band. It had been 20 years since I witnessed a Navy band in action.

Looking spiffy for ceremonial gigs was never a major source of pleasure for me. I guess I was more of a "casual Friday, occasional haircut" kind of guy. The phrase "wears his uniform with unmistakable pride" did not often appear in my performance evaluations.

As I sat waiting for the CINCLANT band to enter the hall, I realized I'd be satisfied with a trio playing light jazz. Heck, a cocktail piano player doing a few choruses of "The Lady is a Tramp" would have satisfied me. Why, I wondered, did the NMA organizers decide we needed to hear a bunch of marches from a raggedy-ass bag band?

Then the CINCLANT band took their positions in the ballroom. These young people looked sharp. They filed onto the dance floor and formed ranks with the seriousness and dignity you'd expect from a ceremonial unit performing at the White House. Their crackerjacks weren't just white--they were white white, with knife-edge inverted creases that looked like they'd draw blood if you touched them.

When it came time for the first march, the band met the conductor's preparatory signals with a precise three-count manual of instruments that clearly had been rehearsed with the same diligence as the music that followed.

How did they sound? Judging from the tidal waves of applause after each number, I'd say no-one in that room had ever heard a finer military band. And the middle-aged man in the back of the room, hollering and oohrahing after each number; that guy was me.

I wonder if it had something to do with the way they looked.
Posted by Frank Mullen III at 11:57 AM No comments:

I'm sitting at a computer in a public library in Northern Virginia. My wife and I are traveling for a few days while I decompress from the NMA reunion in Virginia Beach last week.

I'll have lots more to say when I get home in a few days, specifically about the sea stories, the incredible music and, mostly, the joy of meeting up with first-time attendees.

But while I'm here, I thought I'd report on my to-do list.

1. The tale of Tex and the fake orders to the Navy Band did not get told. At NMA reunions, sea stories flow like hot lava from Mt. Vesuvius, and you can't squeeze them all in. Besides, Tex was busy telling sea stories about me. Ouch.

2. I did play piano solos in octaves. Very high octaves and very low octaves. This was not due to my smooth and fluid technique; the piano suffered the loss of a few keys in the middle octave, so it was necessary to solo in the extreme regions. Try to imagine a piccolo and contrabassoon playing "Night Train," each in their own comfortable ranges, and you'll understand how much my solos were appreciated.

3. Lee Hudson did not attend the reunion, so I didn't have to deal with that incompetent fool breathing my air. He probably found out I was coming and spent the week hiding out in a cheap motel in western Canada, speaking in a fake French accent and wearing Groucho glasses.

4. I did attend lots of Big Band rehearsals. And jam sessions in the lounge. And bull sessions at the bar. We still swing, baby.

5. I did play Freddie Green-style guitar with a big band. The Seven O'clock Band--named for the resiliency of players who are willing to start rehearsing Rob McConnell charts at 0700 after having soared with the eagles during the previous evening--didn't have a guitar player. Enter Frank Mullen. For the second year in a row, I didn't get thrown off the bandstand.

I'll be back with more when I get home in a few days. For now: fair winds and following seas.
Posted by Frank Mullen III at 12:59 PM No comments: