None of the Above

There were hundreds of questions on MU promotion exams, but only two answers.

If the question was about music, the answer was "D. None of the above."

If the question was about anything else, the answer was "D. Four Ruffles and Flourishes and the Admirals March." 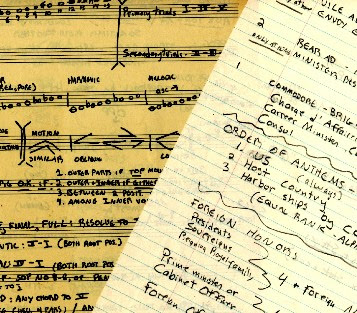 Sure, there were questions with different answers. But the saltiest of us knew how to play the odds: unless you're sure you have a better answer, you choose "D."

It's exam day. Hundreds of test-takers sit at separate tables in the silent chow hall, etching their futures in columns of ovals with #2 pencils. An MU ponders the possible answers to a question about non-harmonic tones; should he choose "cambiata," "appogiatura" or "accented passing tone"?

"I'm pretty sure the answer is "none of the above," he says to himself. "but I think it's a trick question." He picks "cambiata" because it sounds like a sports car.

This fellow just fallen prey to that dangerous mental aberration, "thinking." Instead of sticking with the tried and true "none of the above," Mr. Genius just thought his way out of a pay raise.

"Uh oh," whispers the MU seated at the next table, who is sweating through Honors and Ceremonies. "I never heard of a 'Minister Plenipotentiary with credentials of Consul General Extraordinaire.' I've already used the 'Four Ruffles and Flourishes" answer nine times. I think I'd better pick another."

There's that pesky "t-word" again; this MU won't be sewing on a new crow anytime soon.

The keys to success in the military have always been attitude, initiative and teamwork; it's action that counts. They don't give medals for thinking about charging machine gun nests.

At least, I don't think they do.
Posted by Frank Mullen III at 2:03 PM No comments: