Another example of government incompetence

(Washington, D.C.) The National Department of Teleportation has become the target of a federal probe after a series of failed experiments.

Earlier this month, John Fluck, LCDR (RET), was accidentally teleported to the White House. "Was I surprised? Hell, yes," Fluck said. "They aimed the beam at me and told me I was going to a jam session in Copenhagen. The next thing you know, I'm in the White House banging out 'Chopsticks' with George W. Bush."

Asked to judge the president's musical abilities, Fluck, a former Navy musician and current NMA member replied, "How should I know? It was 'Chopsticks,' for crying out loud. He had the top part. The real work is in the accomaniment." 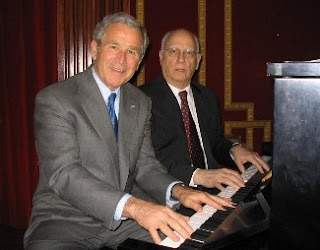 Teleportation volunteer John Fluck is surpised
by the results of an experiment gone wrong.