Posted by Frank Mullen III at 1:39 PM No comments:

We often think of our armed forces as a large family of brothers and sisters united in camaraderie and purpose. The fact is, harmony does not always prevail in families -- the Simpsons and La Cosa Nostra come to mind. Certainly, the bonds of fellowship were strained during the Great Lakes Recruit Training Center Christmas War of 1974.

During November, a recruit in Company 397 named Robinson figured out how to get into our company commander's office and turn on his radio. Whenever the C.C. left us unsupervised, the melodious strains of "Benny and the Jets" and "Smokin' in the Boys Room" filled the barracks.

I, too, did my part to raise morale. After we watched a training film that warned of the grave dangers of consorting with loose women -- a film so anatomically vivid that it made grown men moan and shut their eyes -- I wrote a marching cadence that Company 397 chanted while trudging around the base:


"She looked so young and pretty,
I brought her home to rap.
I gave her all my lovin',
She gave me a case of the --"

At this point, the company of recruits would clap their hands together. (Either you get it or you don't. Sailors at Great Lakes Recruit Training Center got it.)

Spirits were high, but the day after Thanksgiving, our warm fuzziness turned cold. Chicago radio stations were now playing "Away in a Manger" and "Jingle Bell Rock" day and night. Many recruits enjoyed music that evoked memories of Christmases past. Most didn't. "I don't want to be reminded of home right now," was the majority opinion.

So Company 397 marched through December in Grinch boots, the only music that of screaming company commanders and red-faced drill instructors. Morale sank. By Dec. 24, no one was talking to anyone else. Robinson was mad at Mullen for not taking sides in the Christmas War. Mullen was mad at Galliano, the leader of the anti-Christmas brigade. The spirit of discord ruled. What Company 397 needed was a savior, a peacemaker.

Seaman Recruit Mullen to the rescue.

While calling the cadences as we marched to the chow hall for lunch on Christmas Eve, I instituted a new musical innovation: the marching Christmas carol. I would call out the lines of a beloved nativity song, and the recruits would answer with the traditional cadence-call:


"Hark, the Herald Angels Sing,
(Hut, two, three, four),
Glory to the newborn king.
(What did I join the Navy for?).
Peace on earth and mercy mild,
(Five, six, seven, eight),
God and sinners reconciled.
(Six more weeks, and I can't wait.)"

We performed five or six of these compositions, which, I'll admit, all shared a certain similarity, for instance,


"Good Christian men, rejoice,
(Hut, two, three, four,)
With heart and soul and voice.
(What did I join the Navy for?)"

But somehow, those cadences were enough to end the war. Goodwill returned, and we turned on the radio and closed our eyes as Bing Crosby sang, "I'll Be Home for Christmas, if only in my dreams."

As tough as that boot camp Christmas was, its hardships were trivial compared to those that American service members in Iraq have endured for nearly nine years. This year they'll be home for Christmas, not in their dreams, but in the arms of their families. The songs of the season will surely hold a special meaning for them, but the sweetest music will be the sound of the words they'll hear on sidewalks, front porches and church steps, in barracks, living rooms and corner stores:

The trouble with solo piano gigs...

...is that there's always someone hanging over your shoulder. 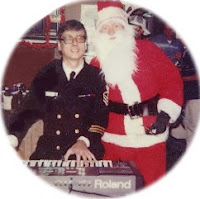 Posted by Frank Mullen III at 12:30 PM No comments:

Those of us who have played for the annual commemoration ceremony of the Pearl Harbor Survivors Association know the humbling feeling of watching those representatives of a brave and resilient generation cast a memorial wreath upon the waters.

Hold tight to that memory. On December 31 of this year, the Association will resign its charter and dissolve. As CNN points, out, age, ill health, and time have brought about this inevitable decision.