A few weeks after the terrorist attacks of September 11, 2001, I was painting my porch while listening to a radio broadcast of the "United in Memory" ceremony at the Pentagon. Since the day of the attacks, I'd been feeling what all Americans had been feeling: anger, grief, shock, fear. Now, as the US Navy Band played through the tinny speaker of my radio, I added to my woes the feeling of uselessness.

I'd been out of the Navy for 14 years, but I knew that across the fleet, Navy bands were at work honoring America, consoling the nation and stirring its resolve. Not all these performance were broadcast nationally but each was vital locally. 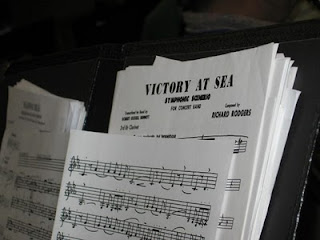 I was no longer the sailor called to action by a national tragedy. I was a middle-aged guy in a sweatshirt painting his front porch while listening to a Navy band on a transistor radio.

A few years later I joined the Navy Musicians Association and have since become a happy cheerleader for the organization. I'm always willing to share the benefits of membership, the camaraderie, the reunions, the music and stories.

But overriding all of these is the knowledge that through my membership in the NMA, I remain a part of our Navy's history of musical service. I'm a member of an incredible band of veterans and a shipmate to those who still play the music that accompanies our national celebrations and sorrows.

All these years later, I'm still an MU.