The Old Vet in the Audience 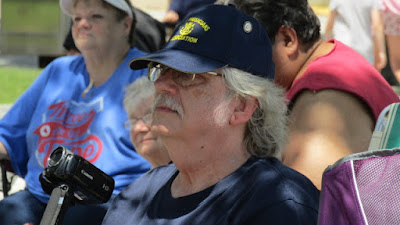 He sat in his lawn chair in his Navy unit cap and applauded respectfully. He saluted when you played the National Anthem and stood proudly when you played Anchors Aweigh. And when the concert was over, that ancient Navy veteran hobbled up to the bandstand and pestered you:


"Did you know Bill Deckler/Jack Portsworth/Ed Hallerman?"
"When did the Navy do away with/bring back crackerjacks?"
"Do they still have a band in Boston/San Francisco/Charleston?"

You needed to change back into civvies, tear down the gear, load the truck and take off. But you put up with the old guy's meandering, trying not to let him see how often you were checking your watch.

This week, at Navy Band Great Lakes' Navy Week performances in Rock Island, I asked my wife to take a few pictures. I've just perused her photos and learned something shocking:

That old Navy vet is me.


I don't know how this happened. Maybe I'm in the Twilight Zone. All I know is, I sat enthralled by the sounds of our Navy's finest and, when the show was over, there I was, harassing the band's members and leaders with those same Geriatric Questions of Old.

One difference, though: all the MUs I met--before the show, after the show, in and out of uniform, from the oboe player, to the CPOs, to the bandmaster himself--were unfailingly interested and engaged. They made me feel like a young sailor shooting the breeze with his shipmates.

Well, except for the part where the chief and the lieutenant had to help me up out of my chair.